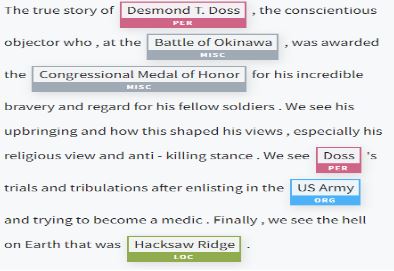 A blog and research paper from Google Deepmind brought our attention to the concept of relational reasoning. As humans we have the innate ability to connect the dots or plot a narrative from piece of information to make a decision either to run a search, make a purchase or predict the outcome of a movie. Artificial agents are yet to attain the creative human ability to connect entities together via a narrative exercise that leads to human action. A few days ago my wife told me an interesting story. She ran into a friend at the entrance of a shop, he’s just grabbed himself a drink and some popcorn. She asked him where he was headed and he said to West India Quay. It is a place in east London which boasts of a handful of restaurants, bars and a cinema. She pieced together the the popcorn, drinks and West Indian Quay and asked him if he was headed to the cinema? He was quite surprised and affirmed he was headed to the cinema. She then predicted or stated that he owns a monthly Cineworld membership. He was quite shocked and nodded to having a monthly Cineworld membership. She told me, her experience of buying popcorn, drink and preferring the West India Quay Cineworld with her Meetup movie mates, assisted her in creating a relationship and narrative from the little information she received to correctly predict the intention of her friend. This is relational reasoning at work as the deepmind team clearly mentioned “ We carve our world into relations between things. And we understand how the world works through our capacity to draw logical conclusions about how these different things – such as physical objects, sentences, or even abstract ideas – are related to one another.”